The 2008 Education for All (EFA) Global Monitoring Report was launched at the United Nations Headquarters in New York on 29 November. This year the report focuses on the mid-term assessment of where the world stands in meeting the EFA goals. 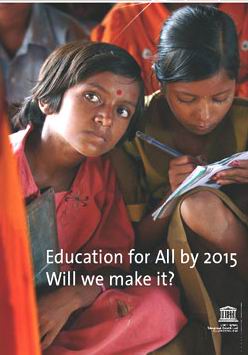 • Out of 129 countries with data, 51 have achieved or are close to achieving the four most quantifiable EFA goals (universal primary education, adult literacy, gender and quality of education);

• Primary education enrolment has improved since 2000, especially in regions with low enrolments but quality of education remains a problem. Sub-national disparities in school participation continue to persist in many countries, including in Nepal, Bangladesh and India;

• The gender parity goal has been missed; only about one-third of countries reported parity in both primary and secondary education in 2005. Boys participation and underachievement are of growing concern in secondary education;
• 774 million adults worldwide lack basic literacy skills, some 64% of them are women

• 18 million new primary teachers are needed by 2015. Teacher shortages remain a problem, particularly in sub-Saharan Africa, and South and West Asia. Pupil/trained teachers ratios are above 100 in Afghanistan, Chad, Madagascar, Mozambique and Nepal;

• Measures to expand ECCE are in place but there is a lack of policies for children under the age of three and ECCE programmes are not reaching the poorest and most disadvantaged children, especially in developing countries;
• Given the results, the GMR recommends five policy priority areas: inclusion, quality, literacy, capacity development, financing