Last weekend, UNESCO and the Central Asian Crafts Support Association, CACSA, announced the winners of the 2007 Seal of Excellence for Handicraft Products in Central Asia. 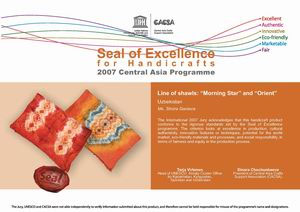 Award certificates were handed out to winning entries during a ceremony at the annual Central Asian Crafts Fair, held at the Central State Museum in Almaty on 1-2 December.

The Seal of Excellence was awarded to 37 products. Sixteen winning entries were from Kyrgyzstan, two from Kazakhstan, six from Iran, two from Tajikistan and eleven from Uzbekistan. All awarded products were exhibited at the Crafts Fair.

A wall calendar with the 2007 Seal-winners will be published by UNESCO and CACSA for 2008. The products are listed on the websites of the UNESCO Offices in Bangkok, Beijing, New Delhi and Almaty. They are also shown at Results of the Seal of Excellence for Handicrafts Programme in Сentral Asia for 2007

The original Seal-winning handicrafts from each year's competition are on permanent exhibit in the CACSA exhibition room, Bishkek, Kyrgyzstan (Manaschy Sagynbay street 162 a).