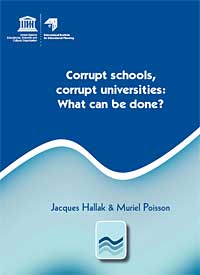 “Corrupt schools, corrupt universities: What can be done” is the result of several years of research into ethics and corruption undertaken by UNESCO’s International Institute for Educational Planning (IIEP). The report assesses the nature and extent of the problem, how much it is costing societies and identifies ways to address it. Several case studies from all regions of the world are presented in the report, revealing the great variety of corrupt practices in countries, both rich and poor.

The authors, education specialists Jacques Hallak and Muriel Poisson, also make a number of recommendations on how the problem can be dealt with, and look at several places where the introduction of simple measures has all but stamped out corrupt practices.

On the same day, the IIEP will open its first international Summer School on “Transparency, accountability and anti-corruption measures in education” that will be held from 6 to 15 June 2007. Senior officials as well as civil society representatives from more than 20 different countries will attend. IIEP’s partners in this initiative include: the World Bank Institute (WBI), the Open Society Institute (OSI), Transparency International (TI) and the Utstein Anti-corruption Resource Centre (U4).

Advance copies of “Corrupt schools, corrupt universities: What can be done”, and a press kit, are available to the media under embargo in printed versions and PDF format.